Jessica Simpson On Being Pregnant Again: Eric 'Keeps Knocking Me Up' 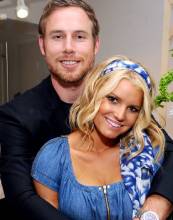 ) says she was shocked upon discovering that she was pregnant again just six months after the birth of her daughter.

"We've had two different wedding dates, but he keeps knocking me up," Simpson joked on 'The Tonight Show' of her NFL fiancé Eric Johnson.

"We're doing it very backwards, I know... I'll just keep my legs crossed, I guess, this time," she laughed. "Apparently it was a part of God's plan for my life."

"I was extremely shocked," Simpson said. "Because I was going through a lot of hormonal changes, trying to get back to the old, vibrant Jessica. You know, it was kind of like a one-night stand. And it happened, all over again!"

Simpson says she gained "a lot more" than her doctors recommended, but this time she hopes to eat healthier.

"I didn't really make any healthy, good decisions," she said. "The last time I ate everything in sight. I was really happy to be pregnant and I just didn't even step on the scale. I was the person who turned around and said, 'Just don't tell me, I'm having fun.'"

"I guess I just didn't realize you could gain that much weight that quickly. I had fun doing it but once I had Maxwell I realized that it all wasn't water weight and I had to really work hard. In four months I lost over 50 pounds."

She joked Johnson was "really proud" that it happened again so quickly.

Meanwhile, NBC is reportedly developing sitcom for Jessica Simpson based on her own life.