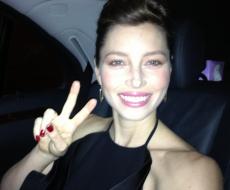 ) teased husband Justin Timberlake about his illegal ballot selfie as she cast her vote on Monday.

The actress shared a silly collage of selfies on Instagram featuring her 'I voted' sticker on her nose, eye and forehead.

"When you're so turnt up about voting that you do a photo shoot with your sticker and think it's cool but then second guess it, but you've already posted, but at least you waited to get home before snapping so you won't almost go to jail," she captioned the photo.

Justin Timberlake said last week he had "no idea" that taking a selfie while casting your ballot was illegal in some states. He came under review after his selfie caught the attention of Tennessee authorities.

Timberlake could have faced a 30-day jail sentence and a fine. However, after reviewing the situation, it let the matter go because no formal complaint was filed.

Of course, with Timberlake's 'Trolls' releasing this weekend, the family dressed up as characters from the movie for Halloween.