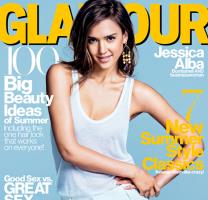 ) may be reprising her role as stripper Nancy Callahan in the long overdue 'Sin City' sequel, but the actress says she's keeping to her no nudity policy.

"I don't want my grandparents to see my boobs. That's it," Alba explains to Glamour.

"It would be weird at Christmas. And, I mean, really, if you look at the movies I have done, getting naked would never 'elevate' the picture."

Alba, who broke out on television, has previously said she felt objectified while starring on 'Dark Angel'.

"I had a show that premiered when I was 19 and right away, everyone formed a strong opinion about me because of the way I was marketed," she told Marie Claire magazine a few years ago.

"I was supposed to be sexy, this tough action girl. That's what people expected…I felt like I was being objectified, and it made me uncomfortable. I wanted to be chic and elegant!"

Now a mother of two, the 33-year-old Alba also talks about her relationship with husband Cash Warren, whom she married six years ago.

"Relationships can be tough, and I was engaged before," she says. "I've only had two boyfriends. In the first one (Michael Weatherly], I didn't have a voice yet, and he was so much older."

"But now, there are no more surprises. At around two and a half years, you're kind of like, 'Are we in it? Are we doing this?' And the easiest part? That would be snuggling every night."