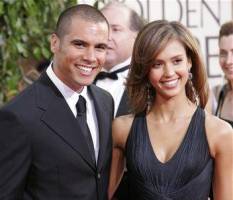 )'s 'Honest Company' is being sued for being "deceptive" with its products.

Jonathan D. Rubin is suing the company, claiming that its all-natural product products are labelled "deceptively and misleadingly" and they aren't so natural after all.

He says a range of products such as the hand soap, diapers and surface cleaner, contain "unnatural" and "synthetic" ingredients even though they are sold as natural.

Rubin also mentions the sunscreen, which thousands of people have complained about as being "ineffective" after serious sunburns.

He is hoping to turn the lawsuit into a class action against Alba's multimillion dollar company.

"Plaintiff Jonathan D. Rubin brings this lawsuit against Honest individually and on behalf of a nationwide class including all other similarly situated purchasers of the Products," the suit reads.