Jessica Alba: I Was 'Body Checked' By Kylie Jenner's Security At Fashion Show 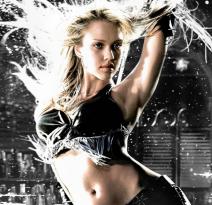 The incident was first reported by the New York Post, which wrote: "After the show, trying to leave the venue, it was very crowded."

"Everyone was in the crush and Jessica had stopped briefly to say hi to someone when all of a sudden from behind came Jenner's bodyguards. They just shoved Jessica out of the way. She just looked astonished!"

During an appearance on 'Watch What Happens Live', Alba was asked what happened. The actress admitted she was surprised at the way she was treated.

"I was just really shocked," Alba said. "I got like body checked."

"It was by two of them. I was like, 'Whoa! Whoa! What's happening?' I thought there was like a fire. 'What's going on?' But I guess someone was just leaving the building. So, yeah, I don't know. It was really shocking."

"You look very suspicious, especially, I'm sure, at a fashion show," Andy Cohen joked about why she was pushed.

"I know, right?," Alba laughed. "Who would trust this face?"