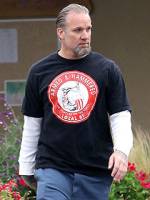 After a month in rehab for sex addiction, Jesse James was spotted back at his Los Angeles area home on Monday.

However, the tattooed bad boy was not wearing a wedding ring as he took his children to school.

Bullock, who had remained out of sight until earlier this month, was also spotted without her ring on April 16.

But it appears the reality of the situation may now be sinking in for 'Monster Garage' star.