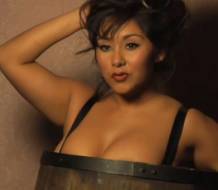 "When Jersey Shore ends I'm going to do more spinoffs," the 23-year-old explains. "If MTV doesn't want them, another network will be, like, 'What does Snooki do now?' or 'Snooki's getting married!'"

"What I'd like is to turn out like Jessica Simpson, with her whole brand. She makes millions. I'm trying to build an empire, because after this I can't get a normal job. I mean, how do I go and sit behind a desk?"

Snooki says she's not as aloof as she comes across on 'Jersey Shore,' and a lot of it has to do with editing.

"If I do something stupid, which is pretty much the whole time, I hate it," she tells the magazine. "I just hate it. Obviously, they're only going to put the good stuff in, and the good stuff is us drunk, so all I'm seeing is me drunk and falling down."

"That's how I am when I party, but some of the stuff I do is, like, 'Really, Nicole?' I look like a freakin' alcoholic. I'm like, 'You're sweating, your makeup is running, you look gross.' I just look like shit."

"It messes with your head," she says of being constantly filmed. "That's why we go crazy. That's why we fight with each other. That's why we drink. We're living in a house for two months with that shit. We can't have cellphones, TV, radio or the Internet."

"If the president died, we'd have no idea. There's no normalcy. It's just like prison, with cameras."