'Jersey Shore' Star: We're Not The Worst Thing Wrong With This Country 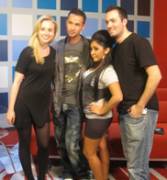 'Jersey Shore' star Vinny Guadagnino says he's used to hearing all kinds of things about their show, but even he's surprised by how far some people take their criticism.

"One time we were in a bar and a guy walked by and said, 'You are everything that's wrong with this country today,'" he recalls in an interview.

"I was taken back by that. There's the economy, poverty, equal rights -- and Jersey Shore is the worst thing that's wrong?"

And despite New Jersey Governor Chris Christie declaring that the hit MTV show is bad for the state, the 21-year-old disagrees: "I think the Jersey Shore is awesome. It's fun, and it's entertaining."

"I think no one knows how we really are," chimes in Nicole 'Snooki' Polizzi. "We have, like, different sides. Obviously you see us on the show we party, we do this, and we do that. But outside of the show, we're very quiet."

"I'll go to frickin' Barnes & Nobles, get a coffee and just sit down and read," she insists. "No one would ever think that. We have different sides to us and people don't see that."

Although she confesses that she doesn't think kids should be watching their show: "I'm not trying to be a role model. I'm just trying to be myself. When I see seven-year-olds screaming my name and saying they're my biggest fan, I'm like 'you shouldn't be watching my show!' My show is for 16 and older."

The 23-year-old adds that even she's looking to grow up and wants to consciously move away from dating a "juicehead."