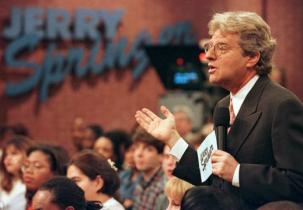 Jerry Springer knows exactly what his show is about and he's not afraid to admit it.

Springer recalls how he fell into the role, without really seeking it out.

"I was anchoring the news in Cincinnati for the NBC affiliate there, and I had been doing that for 10 years," he says. "One day the CEO took me out to lunch and said, 'You know Phil Donahue is going to be retiring, and we're going to start another talk show, and you're going to host it,' and I was assigned to it, because I was an employee. They adjusted the pay and all that, but it wasn't anything I ever aspired to."

'The Jerry Springer Show' began with a focus around news and politics but by 1998, the host had found his niche with strange characters and unusual situations like the man who married a horse.

"The day I figured out, 'Wow! We're on to something,' there were two cultural moments that impacted me, and I think one was being on the Simpsons," Springer says. "And the other was being on the cover of Rolling Stone. That's honestly the first time I noticed that 'Oh my gosh! People are really noticing me.'"

"Our show is a circus, period," he admits. "It has no redeeming social value."

"I'm always afraid not to be working. It's psychological I'm sure. If I ever have nightmares about something, it's about not having a job, which is crazy I know."