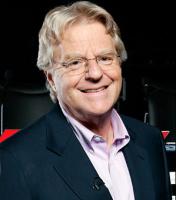 Jerry Springer, who has seen his share of outrageous behavior on his show, says he doesn't see anything scandalous with Prince Harry partying nude with women in his Las Vegas hotel room.

"Honestly, what did he do?" Springer asks. "He was in his own room. I don't know what the scandal is. He wasn't with anyone he shouldn't have been with. There wasn't any sexual activity that was inappropriate."

"Yes, it's silly, childish and perhaps not the image of the royal family but I think the real story is who took those pictures and then sold them?"

"What kind of person is that? He wasn't doing anything wrong. It's the showing of the pictures the thing that becomes inappropriate."

As for the reaction of others in the Royal family to Prince Harry's antics, Springer quips: "I don't think they're going to throw him out of the family."

"This is the tiniest of blips. Do you think there's anybody going, 'Boy, I'll never visit England again?' It's the great nonissue. It's funny, because we're titillated about the posterior of a prince."

Meanwhile, there are some who believe the scandal could get worse.

British publicist Max Clifford says he was "approached by two American girls" who claimed to more photos and evidence from the night for a price but he "turned them down."