Jeremy Renner Says He Accidentally Took Viagra On A Plane 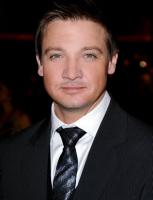 Jeremy Renner says he accidentally took Viagra instead of sleeping pills on a flight from London to Los Angeles.

Giving new meaning to the "upright and locked position," Renner says he meant to take the pill to help him sleep but it did anything but that.

"A lot of times when I'm on the plane, I have to sleep. And I'm not a good sleeper on the plane," Renner said in a recent appearance with Jimmy Kimmel.

"I had to fly from London to Los Angeles for dinner, and then get right back on a plane to London. That's 10 to 12 hours. I had to get off the plane go to work, so I had to sleep on the plane."

"So somebody gave me some pills, like Ambien. So I took a little sleeping pill, popped it and realized nothing's happening -- but something else was happening!"

"I realized very quickly that the 'A' was actually a little 'V' on the pill. Not only did I not sleep the entire flight, but there was 'camping' happening!"

Renner said he "was really embarrassed", but luckily, most of the other passengers "were sleeping."

"The flight attendants were sort of in on the joke," Renner said. "They were like, 'Can we get you anything, Mr. Renner?' 'Yeah, funny. 'Ice! Ice!'"

"Somebody gave you a Viagra instead of Ambien?," asked Kimmel in disbelief. "First of all, you need a new doctor or new friends."

Renner's 'The Bourne Legacy', which opened in top spot at the box office last week, slipped to second this weekend with $17 million, behind 'The Expendables 2'.

The film has earned $97.5 worldwide so far with an estimated budget of $125 million. A disappointment for the studio by any measure considering 'The Bourne Supremacy', starring Matt Damon, earned $288.5 worldwide with its budget of just $75 million.