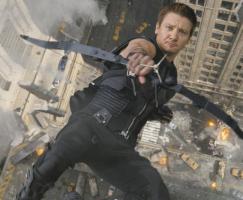 ) or other female co-stars bridge the wage gap in Hollywood.

In an op-ed piece earlier this month, Lawrence asked "Why do I make less than my co-stars?."

Lawrence is the world's highest-paid actress with an estimated $52 million in earnings. However, the Sony hack revealed she was still only paid a fraction of her male co-stars for 'American Hustle'.

Bradley Cooper recently said that he plans to help female co-stars negotiate equal pay but when asked if he plans to do the same, Jeremy Renner said he can't see doing the same.

"That's not my job," he tells Business Insider. "I don't know contracts and money and all that sort of stuff."

"When it comes to that sort of stuff I let other people deal with that."

"I'm a performer, and I know human behavior. When it comes to that sort of stuff, I let other people deal with that. I do what I'm good at — that's what I focus on."