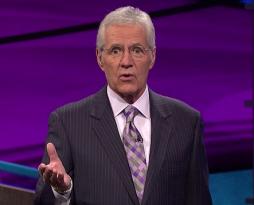 In a video, Trebek revealed Thursday that he had the surgery during the show's holiday break.

Wearing a 'Jeopardy' baseball cap and talking in the same calm manner he gives difficult clues to contestants, Trebek explains: "I had a slight medical problem, subdural hematoma, blood clots on the brain caused by a fall I endured about two months ago."

"Surgery was performed," he continues, "after two days in the hospital I came home and started recovery. The prognosis is excellent, and I expect to be back in the studio taping more 'Jeopardy' programs very, very soon."

Filming has been halted until the 77-year-old Canadian is ready to return to work. He has been hosting 'Jeopardy' since 1984.