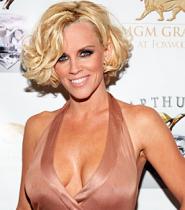 In an appearance with Howard Stern on Monday, Jenny McCarthy talked about her upcoming wedding and her year of "me time" before she met fiancť Donnie Wahlberg.

"I've been searching for the oneóas you know, you were even helping me last time I was here trying to figure out people," began McCarthy.

"So I went on a year of not dating, not f--king, doing nothing except being by myself."

"Basically I wanted a year of... celib... I was just by myself," she explained.

But when Stern didn't buy that she wouldn't have dedicated some of that time to her physical needs, McCarthy replied: "I went through probably 400 vibrators, I think."

"I wanted to detox. It's like the same movie, different actors. I realized I had to reset."

McCarthy said the wedding would take place sometime in the "next couple of months" with around 80 guests but no celebrities other than her closest friends, including 'The View's Sherri Sheperd, because "I hate celebrities."