Jennifer Morrison Explains Decision To Leave 'Once Upon a Time' 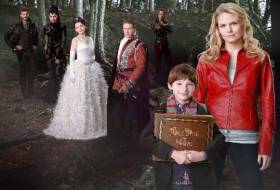 Jennifer Morrison is telling fans why she decided to leave 'Once Upon a Time'.

Morrison is leaving the series and her role as Emma Swan after six seasons on the ABC fantasy series.

"Obviously any decision like this is really tricky because I care tremendously about the show and about everyone involved in the show," Morrison tells EW.

"Obviously, it's bittersweet on both sides. We all love each other. I love Adam and Eddy," she says of show creators Adam Horowitz and Eddy Kitsis, "and I love everyone on the show, so it's tough. But it's also a family. We've become a family."

"We've worked so closely with each other over the last six years that you really do become a family, and you know each other very, very well."

Morrison's Emma Swan is expected to face off in a final showdown with the Black Fairy in Sunday's two-hour season finale.

ABC hasn't confirmed 'Once' will return for season seven but if it does, she's expected to return for one episode to steer the storyline in a new direction without her.