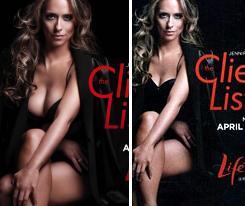 )'s breasts and buxom cleavage have been digitally reduced in new ads for 'The Client List'.

After plastering its original ads, which featured the actress' assets front and center, all over magazines and billboards, Lifetime is digitally covering up Jennifer Love Hewitt by giving her a flatter chest and a higher-cut top.

The more modest ads are being created for locations that may feel a little uncomfortable with posters baring so much skin.

But Jennifer, who plays a struggling housewife who starts working at a massage parlor that offers up happy endings, says she had no idea a second version of the posters was being created.

"Somebody sent me a copy of the photograph, and I was like, 'Ummm, what happened?'" she told KROQ. "I'm not quite sure what's going on. But apparently somebody wanted me to have a boob reduction."

"The thing that"s even crazier is that usually when they do that stuff, I had to see the photograph before they went out anywhere, and I never saw a new version of it."

The actress also said she didn't understand some groups objecting to the show.

"It's a TV show," she said. "They're not offended by Dexter or Nurse Jackie, but they're offended by me giving a happy ending?"

Whatever they're doing, it's working. The show's Sunday premiere was seen by roughly 2.8 million viewers, Lifetime's biggest premiere since 'Drop Dead Diva' in 2009.