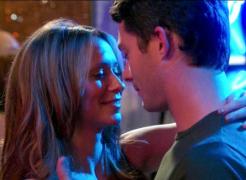 The 'Client List' actress is expecting her first child with her co-star Brian Hallisay.

And not only that, Hewitt is engaged to the actor after he proposed in late May while the couple was on vacation in Europe.

"This is a wonderful time and we are looking forward to starting our family together," the couple say in a statement confirming the pregnancy.

The 34-year-old Hewitt is said to be three months pregnant.

The pair first met when they starred together on NBC's 'Love Bites'. They reunited for the Lifetime show and began dating just over a year ago.

Hallisay was recurring character on the first season of 'The Client List' and became a regular this year.

There's no word on whether the pregnancy will affect filming of the drama, although some fans will certainly be looking to spot the signs with the actress constantly in skimpy lingerie.