Jennifer Love Hewitt Looks Like Different Version Of Herself On 'Kimmel' 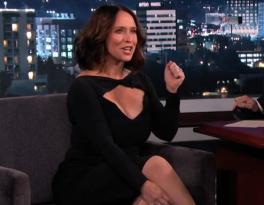 ) joins the cast of CBS 'Criminal Minds' this season.

The actress made an appearance on 'Jimmy Kimmel Live' to talk about joining the drama last night but, while she was sporting her trademark cleavage, Jennifer looked like a slightly different version of herself.

She spoke about get married and becoming a mother with people trying to guess the sex of her baby before she gave birth.

"It's great that way," she said of not finding out whether she was having a boy or a girl. "People are mean to you. And you're like 'I'm a pregnant lady, you can't be mean to me' and they're like 'Well, then tell us what your baby is.'"