Jennifer Lopez Explains Why She Cried After Eliminating Chris Medina 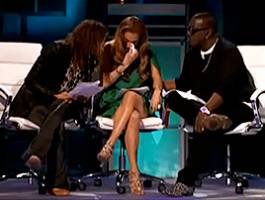 In a chat with Ryan Seacrest on his KIIS-FM radio show, Jennifer Lopez (photos

) tried to explain why she broke down into tears as she told Chris Medina he was going home.

"As we were going down the list, I didn't realize I had to tell him," explained Lopez. "All of the sudden it was my turn and I was like, 'Oh gosh, how am I going to say this?' At the end of the day we had to do our job, which was to pick the top 12 guys and he wasn't in it."

"And that was tough to do because you had grown to have so much respect for him as a person."

Medina has been heavily featured this season due to his story as the primary caretaker for his brain-damaged fiancée, who was severely injured in a car accident shortly after their engagement.

"I didn't break down when he was there necessarily, I did it afterwards after he left," Lopez said. "It really hit me. I just couldn't believe I had to deliver this news to this person who I felt had been through a lot, and is going through a lot, and I felt like I didn't do it well enough for him."

"He handled it with such dignity and so much class, and that made it worse for me. I was like 'Oh, he's so awesome, I respect this person so much.'"

"Even though I'm an emotional and passionate person, I'm very in control of my emotions. I've had to be, over the years, being in the public eye. You have to learn how to suck it up, but that was actually a moment that I didn't expect to be on-camera, in the show. I was really how I felt in that moment. It was really hard."

"This is all new to me," she continued. "I'm used to having a script in a movie, or a big performance with a cane and a microphone, and I have all kinds of stuff going on. You're not always getting me."

"This is the first experience where I feel like people are getting to know who I am as a person. It's such a vulnerable place to be."