Jennifer Lopez On How She Began Dating A-Rod: 'Felt Like Tapping Him On The Shoulder' 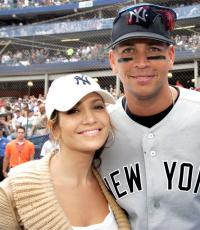 In an appearance on 'The Ellen DeGeneres Show', Jennifer Lopez (photos

) told the host how she began dating Alex Rodriguez.

"It's very simple. I was having lunch somewhere and I saw him. He passed by," Lopez said. "Afterward I went outside, but for some reason I felt like tapping him on the shoulder and said, 'Hi.'"

After chatting about life in Los Angeles since the former New York Yankees star had recently moved there, they agreed to meet again.

Lopez was quick to dismiss the idea that she put out that night.

"No. Mama don't sleep over on the first date," she laughed.

As for all the speculation around their relationship and whether it was serious, Lopez replied: "Oh, my God. We're just having a nice time right now."