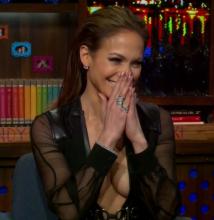 Before 'Gone Girl' was released, Ben Affleck joked that his brief nudity in the film looked "better in 3-D."

During an interview with Andy Cohen on 'Watch What Happens Live', for which she wore a daring cleavage-baring number, the 'Boy Next Door' actress gave her thoughts on Affleck's exposure.

"Nothing I haven't seen before," she laughed.

"I think the worst, probably lowest point was the whole Gigli era. It was pretty tough," she admitted of their real-life breakup soon after the release of the flop.

"It was a very badly reviewed film. I was in a high-profile relationship at the time that fell apart in a really bad way, and so the kind of mix of those two things and the tabloid press had just come into existence at the time, so I was like a poster child for that moment."

"I was in the tabloids every other week about how my life was falling apart. It was a tough time."

But Lopez said she didn't have any regrets: "No. No regrets. I would do it all over again I think. I really would. Even the relationship part. I just feel like everything is part of your story and your journey and is meant to be and helps you grow if you're willing to look at it, and I'm willing to look."

Lopez was also boldly asked by Cohen about the look of the men she dated after Affleck. She married Marc Anthony and after their divorce became a pairing with Casper Smart.

"Maybe what I liked when I was younger wasn't as good for me, but now I have different criteria. As far as type-wise, like look and everything, I'm not a looks person. I don't know if you noticed over the years?," she grinned.

"I thought they were all hot. Other people might be like, 'What the hell is she thinking?' But I don't care."