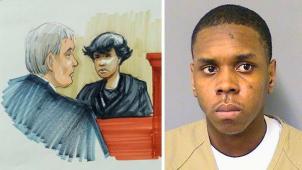 Cook County Circuit Judge Charles Burns struggled to contain his anger as he sentenced Jennifer Hudson's estranged brother in law, William Balfour, on Tuesday to three life sentences for the 2008 murders of the singer's mothers, brother and nephew.

Balfour was found guilty in May of first-degree murder in the 2008 shooting deaths of Hudson's mother, brother and nephew.

Emotions ran high in the courtroom as Burns struggled to contain his anger. "You have the heart of an arctic night," Burns told Balfour. "Your soul is as barren as dark space."

However, Balfour maintained his innocence and offered condolences to the Hudson family.

"My deepest sympathies go out to Julian King. I loved him. I still love him," he said. "I'm innocent, your honor."

Burns responded that he had no doubt "whatsoever" that Balfour committed the crimes, including the shooting of the young nephew "just because he was there. I don't think you have one ounce of remorse in your soul. I really don't," Burns said.

Noting Illinois did not have the death penalty, Burns said had no choice but to impose a sentence of life in prison without the possibility of parole.