Jennifer Garner Can't Do 'Anything That Extreme' After Dieting For 'Alias' 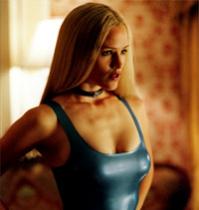 Jennifer Garner says she's happy to have given up extreme dieting after doing it for so long while starring in 'Alias'.

"I mean, believe me, there's always a point in the fitting where I feel like, 'Why didn't I just try to lose four pounds and then I could wear any dress?' I just can't though," the 42-year-old tells makeup expert Bobbi Brown.

"I dieted for so long in the middle of doing Alias and being a superhero, that there's something in me that can't do anything that extreme."

The superhero she's referring to is, of course, her role as Elektra.

"With food I'm probably good 80 percent of the time. I've found out that I cannot pass up pizza without having some. I just can't! My kids have a lot of pizza. I can't go to a kid's birthday party without having a slice.

Garner says her husband, Ben Affleck, eats similarly "unless he's in the middle of really, really training for something."

"And then, it's such a different thing. Every calorie and every gram of protein—everything's counted in a way...I don't know how he does it."