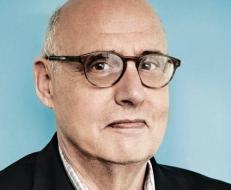 This after sexual harassment allegations made against him by two crew members of the Amazon series.

"Playing Maura Pfefferman on Transparent has been one of the greatest privileges and creative experiences of my life," Tambor says in a statement. "What has become clear over the past weeks, however, is that this is no longer the job I signed up for four years ago."

"I've already made clear my deep regret if any action of mine was ever misinterpreted by anyone as being aggressive, but the idea that I would deliberately harass anyone is simply and utterly untrue."

"Given the politicized atmosphere that seems to have afflicted our set, I don't see how I can return to Transparent."

Tambor has denied that he had ever "been a predator."

"I know I haven't always been the easiest person to work with. I can be volatile and ill-tempered, and too often I express my opinions harshly and without tact. But I have never been a predator — ever."

"I am deeply sorry if any action of mine was ever misinterpreted by anyone as being sexually aggressive or if I ever offended or hurt anyone. But the fact is, for all my flaws, I am not a predator and the idea that someone might see me in that way is more distressing than I can express."