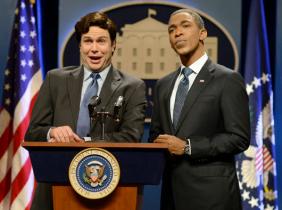 NBC has announced that the pair won't return when the sketch comedy returns this fall for its 42nd season.

Pharoah was best known for his Barack Obama and Kanye West impressions and Killam used to do Ted Cruz, Paul Ryan and Donald Trump. However, he lost that role to Darrel Hammond.

It was initially assumed the veterans of six seasons wanted to leave SNL to pursue other projects. However, it was actually NBC that decided to drop the stars in a cast shakeup.

"You sign for seven years, so I had one more year," Killiam says in an interview. "I had sort of had it in my head I would make this upcoming year my last year, but then heard they weren't going to pick up my contract."

"I was never given a reason why, really. I can assume until the cows come home."