Jay Leno Reveals What To Expect From His New Primetime Show 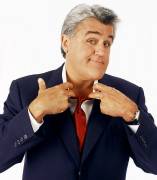 Speaking at the Television Critics Association press tour on Wednesday, Jay Leno said he was raring to go.

And having dropped 12 pounds since leaving the 'Tonight Show' in May by running four miles a day, you can't say Leno doesn't look ready for the big debut of his new 'Jay Leno Show' on September 14.

"It won't be a talk show and it won't be a variety show with people wearing hats and wigs," explained Leno.

"It will have a lot more comedy bits and we will be using a lot of young comedians that are not necessarily stand-ups, though some are, as correspondents, shooting and editing their own pieces and putting them in the show."

"It'll be a little more interactive than what we were doing before and more off the couch. It doesn't look like we're gonna have a desk. Although, in the last 15 minutes, we might need a desk just to do a 'Headline' piece or something. But that won't be the focus."

Popular Tonight Show segments like 'Headlines', 'Jaywalking' will definitely return, but they will be placed near the end of the show to help the local NBC affiliates, who are probably most concerned about the new experiment. Other changes will be that the show will typically limit itself to one guest a night and musical acts only twice a week instead of every night.

Jay-Z will perform with Rihanna (photos

) and Kanye West on the premiere episode of the show as they sing 'Run This Town'.

"And we're doing a thing called the Green Car Challenge. We will take a celebrity, put them in one of our Ford Focus electric cars and we're gonna see who can turn out the fastest time on our track, see who is the fastest green celebrity."

"And these cars are really fast. They're not toys. This way you can get sports stars and people who do not necessarily want to sit down and talk but would rather do something interactive."

Leno is expected to air original episodes in 46 weeks out of the year, and should do especially well against the inevitable drama repeats seen throughout the season on other networks.