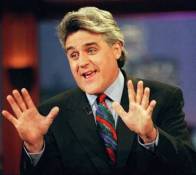 "This is our last 'Jay Leno Show', Kev," ," Leno said in his final monologue. "The show was supposed to last two years. But my sentence was reduced to five months for good behavior."

"We were on the air five months. It seems like just yesterday I was telling NBC this is not going to work."

"People say, 'What has changed the most in five months?' I'd have to say Heidi Montag (photos

The comedian joked he should have known it wasn't going to last when he pulled into his parking space and it said, "Jay Leno, No Parking After Feb. 9."

Leno even had Donald Trump make an appearance to deliver his trademark "you're fired."

But one thing he didn't do was talk about his return to the 'Tonight Show' and whether we'll once again see his current set -- with minor changes, of course -- or a whole new look when he returns following the Olympics.

And with a segment with NBC Sports anchor Bob Costas running unusually long, Leno barely had time to tell viewers to stay tuned for the news, let alone end with a goodbye.

But considering the late night fiasco that came of NBC's disastrous primetime scheduling of 'The Jay Leno Show', perhaps it's just as well that he didn't.