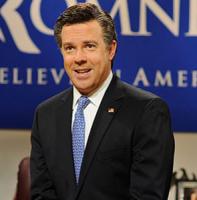 "A person can go on for as long as they want. I mean, Lorne Michaels has been kicking butt at it for 33 years out of 38, but for me, I'm definitely done," Sudeikis told David Letterman on Wednesday. "I'm gonna be leaving. I'm not coming back in the fall."

"It's been fantastic. It's been amazing," he said of first being a writer before moving in front of the cameras after two years. "I'm very, very lucky."

The 37-year-old, who stars in 'We're the Millers' opposite Jennifer Aniston (photos

) as a stripper playing his wife, also made reference to the fact that he's making the switch to do more movies.

"Yeah, you start to get the itch probably in August when all these sketch ideas will show up and I'll be like well can I make this sketch idea last 90 minutes and turn into a movie? Probably not!"

Both Fred Armisen and Bill Hader have already announced they are leaving the show.