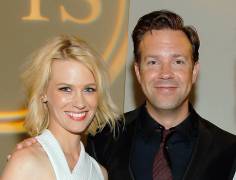 'Saturday Night Live' cast member Jason Sudeikis says he's still getting used to being the target of the paparazzi.

"They don't follow me around," the 34-year-old told George Lopez. "But they sometimes follow around the girl that I'm dating."

"I don't want to get into it," Sudeikis said upon being asked if he had "seen her naked and everything."

The couple's romance has been heating up in recent weeks with January Jones visiting the set of Sudeikis' comedy, 'Horrible Bosses', on an almost daily basis.

"She just comes and hangs out everyday," a set source tells E!. "At one point, people were joking that they should give her a part in the movie because she's there so often."

Jones and Sudeikis made their relationship official when they hit the red carpet at the ESPY Awards together in mid July.