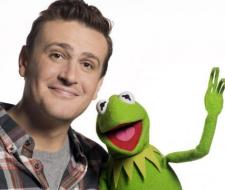 Jason Segel is currently out doing promotion for his new film 'The Five-Year Engagement' opposite Emily Blunt.

The actor joked that he "wrote all these love scenes with Emily Blunt and she shows up and she just has to do it because we're paying her money and it's her job."

Segel also told David Letterman this week that he was "forced to lose weight" for the role to make it believable that Blunt would marry him.

"The studio president called and was told me that it had to be conceivable that Emily Blunt would ever choose me to be her husband," he laughed. "Which is fair."

But did you know there was another critic of the 32-year-old 'How I Met Your Mother' star's look when Disney was test screening 'The Muppets'?

Watch below to hear the hilarious story and see the kid's note about 'Gary's Face' on the comment card: