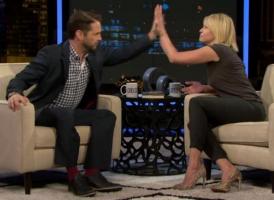 Jason Priestley and Chelsea Handler raised a few eyebrows on 'Chelsea Lately' after the pair high-fived over their DUIs.

Describing driving under the influence almost as a rite of passage, Priestley was on the show to promote his new memoir.

"I was in jail because I had a DUI. You've had a DUI," Priestley began.

"I mean, come on, what self-respecting Los Angeleno doesn't have a DUI under their belt?," he quipped as he put his high-fived the late-night host.

"The important thing is not to get two!," Handler added.

Priestley agreed and remarked: "You get one. Lesson learned."

The former '90210' star then recalled being sentenced to spend five nights in jail in 1999, which he met five Russians.

"I had no idea what I was walking into. There were all these Russian dudes playing this crazy Russian card game where they rip up the cards and they throw the cards, and as I walk in they all stop playing the game and turn and look at me like it was a scene out of Indiana Jones."

"The biggest guy at the end of the table stands up slowly and he walks over to me, and he just opens his arms and he goes 'Brandon!'"

"He grabbed me and he hugged me," he said. "He picked me up and he carried me over to the table and he put me down, and I just sat down and started playing cards with these guys. I played cards with them for five days. I had no idea what the game was, I had no idea what anyone was saying. I just played," he told Handler. "I got out of there in one piece. That's all I cared about."

In a separate interview with 'Access Hollywood', Priestley admitted to have hooked up with many of his co-stars but clarified he never got together with Jennie Garth or Tori Spelling.

"There were multiple engagements on the show with multiple people," he said. "Nobody ever got attached. Nobody ever let it get in the way of what we were doing. Work always superseded."