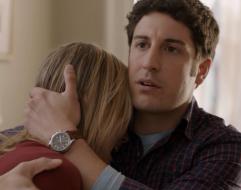 Jason Biggs didn't take long to joke about the Malaysia Airlines crash after news of the tragedy that killed nearly 300 people.

"Anyone wanna buy my Malaysian Airlines frequent flier miles?," the 'Orange Is the New Black' actor said on Twitter.

"In all seriousness, tho- how do you mistakenly shoot down a commercial plane?! Ugh," he then added.

"It's saddest for the victims and their families, obviously. But Malaysia Airlines is apparently a great airline. Gonna be tough to recover."

But after Biggs received some blowback from his fans for his joke, he said: “Hey all you ‘too soon' a--holes- it's a f--king joke. You don't have to think it's funny, or even be on my twitter page at all."

"The idea that I wouldn't have any empathy for the victims or their families because I make a joke is absolutely ridiculous. U know that, right?"

"Truly you losers are literally trying to find shit to get angry about. Channel your issues elsewhere."

Earlier this week on 'Conan', Biggs also made news after saying he tried his wife's breast milk because "I have a right to it as well."