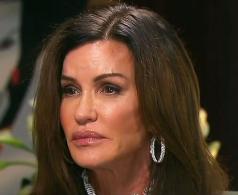 Janice Dickinson earned a victory Tuesday in her legal battle against Bill Cosby.

The former supermodel is suing the comedian for defamation for calling her a liar over accusations Cosby drugged and raped her in 1982.

"I don't really know how I'm feeling, but I could tell you the truth: Rapists should go to jail," an emotional Dickinson said outside court.

Dickinson revealed a few days ago that she's been diagnosed with breast cancer.