Jane Lynch Thanks Ellen DeGeneres: 'You Blazed the Trail for Me' 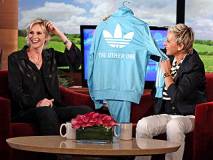 In an appearance on the 'Ellen DeGeneres Show', Glee star Jane Lynch took the opportunity to thank Ellen as they talked about 'coming out' in Hollywood.

"Not so much in my career but I was more closeted in my life when I was younger," confessed Lynch. "I used to lay in bed and go, 'How will I come out, or will I come out?'"

"By the time I started to do work where people knew who I was. I just never made the choice to hide. When you get to our age, Ellen. It's just not a big deal anymore."

Lynch added it was, in fact, DeGeneres's decision to come out on the now infamous 'Yep, I'm Gay' cover of Time magazine in 1997 that gave her the courage to follow suit.

"You were at the height of your fame and you came out," Lynch said. "And that just blazed a trail for me. It really did. It made it so much easier for me, what you did."

"I say it all the time. I'm not as courageous as it seems."

"Let me make another point. I think it's also because I'm a character actor. Like if Julia Roberts were gay, I think it would be harder because she's an ingenue."

"You have to project your hopes and dreams for love on screen, you know like Brad Pitt."

"So, you're saying Julia Roberts is gay?" DeGeneres replied with mock surprise.

"That's what I'm saying. Right here on this show," Lynch said with a laugh. "She won't admit it. I'm here to tell you she's gay. You're welcome, Julia."