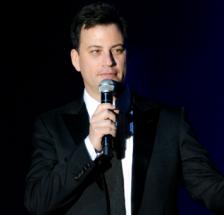 Ever since he was announced as the host for the 64th Primetime Emmy Awards, Jimmy Kimmel says he's been getting some help around the house.

) (2 Broke Girls), and John Krasinski (The Office) cameo in the promo.

"I wonder if they know I'm not eligible to vote," says Kimmel.

The Primetime Emmy Awards will air on Sunday, September 23 on ABC.