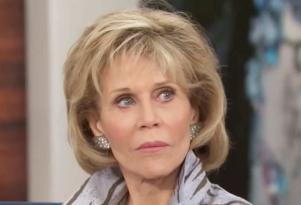 Jane Fonda had no interest in answering Megyn Kelly's question about plastic surgery during an appearance on the 'Today' show.

"You've been an example to everyone in how to age beautifully and with strength and unapologetically. You admit you've had work done, which I think is to your credit. But you look amazing." Kelly said to the 79-year-old actress.

"I read that you said you're not proud to admit you've had work done. Why not?"

"We really want to talk about that now?," Fonda replied bluntly.

"Well, one of the things people think when they look at you is how amazing you look," retorted Kelly.

"Well, thanks," Fonda said. "Good attitude, good posture, take care of myself. But let me tell you why I love this movie that we did, Our Souls at Night, rather than plastic surgery."

In a 2015 interview, Fonda told W magazine: "I did have plastic surgery. I'm not proud of the fact that I've had it. But I grew up so defined by my looks. I was taught to think that if I wanted to be loved, I had to be thin and pretty. That leads to a lot of trouble."