Jamie Foxx Says Anthem Performance Was Not 'A Sin Against America' 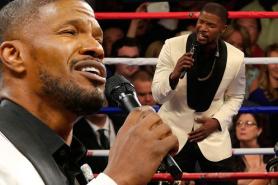 In an appearance on the 'Ellen DeGeneres Show', Foxx said a malfunction was to blame for being "a little off."

He said his earpieces went out so he couldn't hear the music over the crowd noise.

Later, in an interview on Entertainment Tonight, the actor said after he listened to a playback, he would say he committed "a sin against America."

Foxx added he received compliments from Denzel Washington and many others.