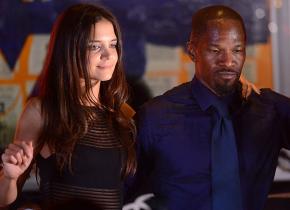 "He is very happy with her," Jordan said of Foxx during an interview Theo Von & Matthew Cole Weiss about the relationship.

Rumors of the two dating have been swirling for several months. However, this is the first time a person close to either party has confirmed they are an item.

In fact, it was reported last September that Holmes went to great lengths to keep the romance under wraps, including wearing a wig, as she met up with Foxx.