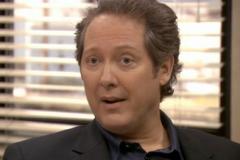 James Spader will not return to NBC's 'The Office' after this season.

One season after filling the void left by Steve Carell as Dunder Mifflin CEO Robert California, the 52-year-old actor has decided not to return for the show's ninth season.

"James always wanted this to be a one-year arc, and he now leaves us having created one of the most enigmatic and dynamic characters in television," executive producer Paul Lieberstein tells 'Variety'.

"He's been a great friend to me and the show, helping us successfully transition into the post-Michael Scott years, and I'm grateful for that."

But 'Office' fans should note that Mindy Kaling, who plays Kelly Kapoor, just completed a pilot at Fox and could leave the show if her series is picked up.

The peacock is also working on a spin-off centered around Dwight Schrute, played by Rainn Wilson, and life on his family farm.

NBC has yet to officially announce if 'The Office' will return for a ninth season this fall and the fallout from two projects will likely play into its decision.