James Harden On Distractions Dating Khloe Kardashian: 'I Had To Eliminate That' 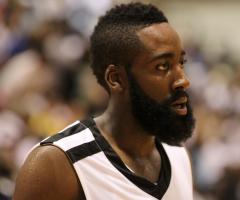 The Houston Rockets player tells Sports Illustrated he wasn't a fan of all the additional distractions that came with the reality star.

"I feel like it was for no reason," explains Harden. "I wasn't getting anything out of it except my name out there and my face out there, and I don't need that."

"It wasn't uncomfortable, but it wasn't me. I don't need pictures of myself when I'm driving my car. Who cares?"

"It was unnecessary stuff that I think trickled down to my teammates," he admits. "I had to eliminate that."

Kardashian and Harden split in February 2016 after eight months together.

Following the split, Khloe implied that they went their separate ways because Harden wasn't faithful.

"I've always said, 'We don't need to be monogamous,'" Kardashian said on her talk show. "'There's a lot of s--t going on in both of our lives. You live in Houston, I live in L.A. Let's just see each other when we see each other.'"

"He sought me out, wanted to be committed, then wasn't committed. Found out he wasn't, and I got the receipts to prove it."