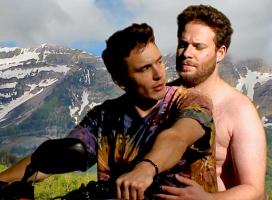 "We did get feedback," Franco said in an appearance on 'The View'. "Kim loved the video and we didn't hear back from Kanye so we kind of felt like he's not bashing us, but he probably hates it but he's not going to say anything."

"But then two weeks ago, we got a call from Kanye. Seth and I were on the phone."

"We thought he was just going to let us have it. But he loved it."

"And I'm pretty sure I can say it now because I'm pretty sure it's not going to happen," Franco said. "He wanted us to perform it live the night before his wedding at Versailles."

"I think it would have been awesome for about 10 seconds, but then there would be Seth with his shirt off in front of all the Kardashians," he chuckled.

Worth nothing is that Kardashian and West have been quiet about the location of their nuptials but Franco may have just inadvertently confirmed Versailles.