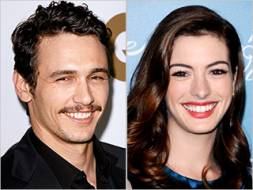 ) will serve as co-hosts for the 83rd annual Academy Awards.

"James Franco and Anne Hathaway personify the next generation of Hollywood icons -- fresh, exciting and multi-talented," say Oscar producers Bruce Cohen and Don Mischer. "We hope to create an Oscar broadcast that will both showcase their incredible talents and entertain the world on February 27."

Hathaway is creating buzz for her nude scenes (link) in the much-hyped 'Love and Other Drugs', while Franco has been receiving Oscar worthy praise for his role in '127 Hours', in which he plays real-life climber Aron Ralston, who cut off his right arm to free himself after his arm was trapped by a boulder.

The 28-year-old was nominated for best actress in 2009 for her role in 'Rachel Getting Married' and showed off her singing and dancing chops when she performed a musical number with host Hugh Jackman at that year's ceremony.

"We have a concept but we can't elaborate on it very much at this point since it's still in progress," Mischer says of their plans. "We felt that an interesting thread running through the show is the enduring power of motion pictures. To do that through the eyes of two young actors who are emerging as major talents in film — we felt that was a great way to go."

"We loved the job that Alec Baldwin and Steve Martin did last year as a duo. And it hasn't been since 1957 that a man and a woman have co-hosted together, so we thought it was time for a male movie star and a female movie star to co-host. As a film producer, casting is always one of the most important and most fun parts of the process. So Don and I were looking for a combination that you hadn't seen before, but when you heard it, you thought, 'That's exciting.'"

Oscar nominations will be announced on Tuesday, January 25, 2011.