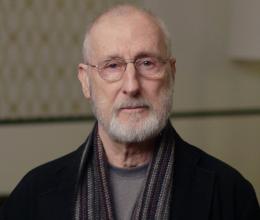 Actor James Cromwell was arrested after leading a protest at SeaWorld in San Diego on Monday.

The 77-year-old was protesting against the 'Orca Encounter' show using a megaphone to tell the crowd about SeaWorld's alleged abuses with members of PETA.

Cromwell, who has become known for his activism more than his acting in recent years, and his fellow protestors were handcuffed and taken away by police as the show continued.

"Orcas deserve a full life in the ocean, not a life sentence of swimming endless circles until they drop dead from disease," he later explained in a statement. "My friends at PETA and I want SeaWorld to move these intelligent animals to seaside sanctuaries without delay."

SeaWorld has been a frequented target from PETA since the 2013 documentary 'Blackfish'.

The park has already announced it plans to end their Orca breeding program and gradually phase out Orca shows.