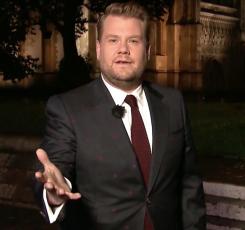 James Corden, host of CBS' 'Late Late Show', has apologized after facing backlash over jokes he made about Harvey Weinstein at the amfAR Gala.

Corden made a string of jokes about Weinstein and the sexual misconduct allegations against him during the charity event.

However, the host faced a barrage of backlash after Rose McGowan said Corden's jokes put down made light of the accusations and the laughs from the audience showed "EXACTLY what kind of HOLLYWOOD you really are."

"This is a beautiful room, it's a beautiful night here in L.A," Corden told the crowd. "It's so beautiful, Harvey Weinstein has already asked tonight up to his hotel to give him a massage."

"It has been weird this week though, watching Harvey Weinstein in hot water. Ask any of the women who watched him take a bath," he said.

That prompted Corden to say on social media after the event: "To be clear, sexual assault is no laughing matter. I was not trying to make light of Harvey's inexcusable behavior, but to shame him, the abuser, not his victims."

"I am truly sorry for anyone offended, that was never my intention."