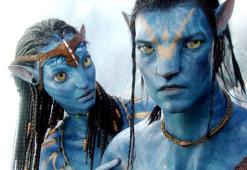 James Cameron says he's working on a number of technical innovations for the 'Avatar' sequels, including true glasses-free 3D.

While accepting an honorary membership into the Society of Motion Picture and Television Engineers, Cameron said technology had come a long way but he wanted to push it further.

"I'm going to push. Not only for better tools, workflow, high dynamic range and high frame rates. I'm still very bullish on 3D but we need brighter projection, and ultimately I think it can happen with no glasses. We'll get there."

"Movie magic has to amaze," he said, "and that involves constant creation of new tools and techniques. The audience's eyes adjust to what we did, and so we need to up our work."

Cameron added that he wanted to get rid of the artifacts that we see sometimes see in today's animation but that it was only possible with higher frame rates, something he's long campaigned for.

The filmmaker hinted that he was working towards using higher frame rates only in certain sequences so as to not jolt the audience.

Cameron didn't promise that all his innovations would come to fruition for the 'Avatar' sequels but it wouldn't be a stretch to see him push the boundaries as he always has. The next 'Avatar' film is set for release sometime in 2018.