Jake Gyllenhaal Talks About His Complicated Halloween Costumes As Kid 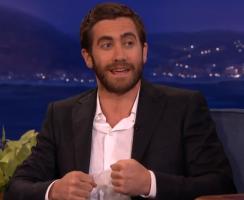 Jake Gyllenhaal tells Conan O'Brien that since his dad was obsessed with designing costumes, it meant he often found himself encased in spandex in huge boxes that he couldn't hear anything in on Halloween.

"One year I was a cranberry juice box. Like a cardboard box the size of my body with a straw that was made out of cardboard. Painted and I wore a white spandex suit. And you put the candy into the straw. It was a whole thing."

"That's just the beginning. It was a month long promenade towards Halloween. We designed it, there were drawings and then everyday I finished my homework, I had to do it."

Gyllenhaal said he was also an Oero cookie and the "ultimate one" was when he was a house.

"I was a house with different scenes in each window and there was a light that lit it up and I wore a backpack battery. It fit on top of my head. I could only see through the one window, the chimney was where you put the candy in and I couldn't hear a thing."