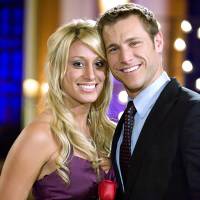 Fresh off their dramatic split, Jake and Vienna sat down with 'Bachelor' host Chris Harrison for what likely was their last interview together.

Pavelka broke up with his fiancé by telephone, while he was filming a guest spot on Drop Dead Diva, amid doubts about whether he could trust her anymore.

So how did it go? Jake reportedly lost his temper after he couldn't get a word in and Vienna ultimately stormed off the set in tears.

"As this was the first time the two had seen one another since their recent breakup, the atmosphere was emotionally charged," acknowledge producers of the show.

Responding to rumors about whether the 32-year-old Texan actually formed a fist in Vienna's direction, they say: "At no time was anyone ever physically in harm's way, nor was anyone ever threatened with physical violence"

One thing clear is that Harrison had to plead with Vienna to let Jake talk as she constantly interrupted the aspiring-actor.

Jake is said to have stood up in frustration at one point and the two had to be separated on set. Vienna eventually stormed off the set in tears.

"Hopefully, it's gonna be some closure for me," Pavelka said before he taped the interview.. "America was there and stood with at the birth of our relationship, and I think I owe it to them an to myself and Vienna and let everybody be there at the end of it. That everybody understands it was real."

The interview will air July 5 during on 'The Bachelorette' on ABC.