Jada Pinkett: 'Nothing Sexual' About Willow's Photo With Shirtless Arias 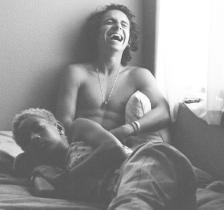 Jada Pinkett-Smith doesn't want anyone drawing conclusions from a controversial photo of Willow Smith, 13, in bed with a shirtless Moises Arias, 20.

Some have called the photo inappropriate after the actor posted it to social media this week.

"Here's the deal: there was nothing sexual about that picture or that situation," says mother Jada.

"You guys are projecting your trash onto it, and you're acting like covert pedophiles, and that's not cool."

Arias deleted the image from his Instagram account after several fans complained the situation was not appropriate.