Jada Pinkett Smith On Open Marriage Rumors: 'Will Is His Own Man' 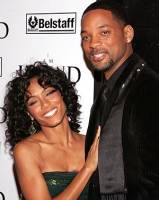 Asked about rumors that she has an open marriage with her husband of 15 years, Will Smith, Jada Pinkett Smith didn't necessarily deny it.

"No, I think that people get that idea because Will and I are very relaxed with one another," she said.

"I've always told Will, 'You can do whatever you want as long as you can look at yourself in the mirror and be OK,'" she said.

"He has to decide who he wants to be and that's not for me to do for him. Or vice versa."

"I don't think it's easy to be married to anyone," the 41-year-old actress added. "I think that you have to go into a relationship knowing—especially when you're dedicating yourself to someone for the rest of your life—this is a life partnership."

A couple of years ago, Pinkett Smith slammed speculation they were headed for a split after she reportedly had an affair with her 'HawthoRN' co-star Marc Anthony, during his marriage to Jennifer Lopez (photos