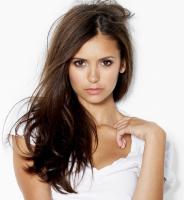 ) may be at the center of love triangles on 'The Vampire Diaries' but Jack Nicholson couldn't be bothered to pose with her.

The 24-year-old beauty says she asked the legendary actor for a photo but he flat out refused.

"Just asked Jack Nicholson to take a picture with me," Dobrev said on Twitter, while attending the Laker's game. "He said no. Rejected."

But that didn't stop her from taking him paparazzi style: "Haha so I took a pic of him solo. Paparazzi LOL."

In fairness to Jack, he probably didn't know about Nina Dobrev's Yoga skills.

The leggy actress, who is currently dating 'Vampire Diaries' co-star Ian Somerhalder, was attending the game with the newly single Julianne Hough (photos

Hough and Seacrest recently split after two years together.